Notice: Trying to get property of non-object in /var/www/html/wp-content/plugins/wordpress-seo/frontend/schema/class-schema-person.php on line 152

Notice: Trying to get property of non-object in /var/www/html/wp-content/plugins/wordpress-seo/frontend/schema/class-schema-person.php on line 230

Notice: Trying to get property of non-object in /var/www/html/wp-content/plugins/wordpress-seo/frontend/schema/class-schema-person.php on line 236

A Spotlight on UNAVSA’s Culture Show

For the past few years, each annual UNAVSA Leadership Conference has included a culture show performance, which entails of a play interwoven with performances from members of the UNAVSA community.

Previous shows have focused on bridging the gap between generations of Vietnamese immigrants and their children, or Vietnamese and North American culture. To get an idea of what goes into creating a production that spans a cast from international backgrounds and the messages they work to convey, we spoke with former and current performers, directors and committee members.

Why is the culture show important to UNAVSA?

CH: While each of our own separate regions have affiliate schools that showcase culture shows, it is amazing to see what we are capable of producing collectively with talent from all over the nation.

What is your favorite part about preparing for the show?

TMD: My favorite part about the preparation was feeling so nervous about hopping on call every week with a bunch of literal strangers that I had never met before and ending up so excited to finally meet them in person. Getting to finally present our show to everyone at UNAVSA was definitely a extremely rewarding experience. We had all been working so hard for the past few months and being able to finally act it out in person with the cast for everyone to see was so worth it.

“Consolidating different elements of our own portrayals proved challenging … but encouraged me to push myself artistically.”

KP: Since the committee and actors work rather independently in the weeks leading up to the conference, we each form our own image of the characters in the script. For example, I always imagined my character as more deliberate, while my directors wanted her to be less forthcoming. When we all connected on the first day of in-person rehearsals, consolidating different elements of our own portrayals proved challenging — but it also encouraged me to push myself artistically and channel a whimsical side of my personality I didn’t know I had.

How are actors cast? 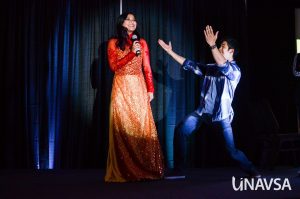 Thu Mi Do and Kalvin Nhan act out their scene during UNAVSA-13.

How is the script determined?

CH: UNAVSA is a foundation and pillar for many students, young professionals, and organizational networks in which we share ideas and educate. If we have the platform to inspire and influence others across the continent, we should utilize our potential to advocate, empower and educate through means of service, leadership, and culture.

“We should utilize our potential to advocate, empower and educate through means of service, leadership, and culture.”

LV: During the initial process, our committee sat down and wrote out a list of issues that we wanted to tackle. From there, we picked a few that we wanted to emphasize and bring to life on stage. For UNAVSA-13, we knew we wanted to portray family in a different way—instead of the parents preventing the child from doing X, Y, and Z, we wanted a parent who supports the child despite circumstances. Then we knew we wanted to show other conflicts that Asian American young adults can face outside of family and that means friends and how those relationships affect us. Lastly, we really wanted to write a love story. Once we had those three pillars down, it was actually easy work for us to craft up the general skeleton of the story. It was filling in the skeleton with meat and details that it got hard.

What would you say to those who are interested in performing in the culture show? 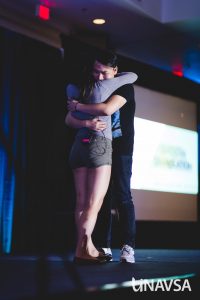 Kat Phan and Daniel Dai’s characters embrace in the final scene of the show.

DD: I am a shy person and my English isn’t very good, so I don’t really talk to someone I don’t know. However, being a part of the show gave me more confidence to talk to UNAVSA participants and affiliates. If you are worried about whether you’re talented enough, just be confident in yourself and push yourself to do something you never thought you’d do.

KP: As someone who loves staying behind the scenes and tucked away from public view, being cast as a lead for UNAVSA-13’s show was as much of a culture shock as it was an artistic challenge. Even though I approached the show with many reservations about my own capabilities, hearing the audience applaud and cheer (sometimes in awe, sometimes in shock) and seeing your co-stars and directors beam after watching their months of hard work come to fruition is a feeling unmatched by any other. No one comes to the first rehearsal (or even the last one) prepared, but we all leave with fond memories of an unforgettable show.

YL: There is nothing more exhilarating than performing in front of hundreds of leaders from across the continent, and even if it is your first time performing in front of a large group, APPLY! The UNAVSA audience is extremely supportive and this is your opportunity to not only represent yourself but also your region.

Whether you’ve been in theatrical productions since the elementary school days, or simply want an opportunity to do something different at UNAVSA, performing in UNAVSA’s culture show is a sure way to engage with a new aspect of the conference and expand your boundaries in performance and culture alike. Auditions will continue until May 5 at 11:59p.m. PDT, and the team (as well as the rest of UNAVSA!) hopes to see you onstage!